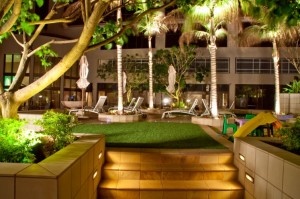 The Garden Court group of hotels is owned by Tsogo Sun and can be found all over South Africa with an emphasis of their locations being in close proximity to local attractions. This means that the many Garden Court Hotels are situated in urban areas, seaside and National Parks. In Durban, Garden Court Hotels can be found in Marine Parade, South Beach and Umhlanga Rocks. The Garden Court Umhlanga Hotel is ideally situated close to the beach in the heart of Umhlanga making it a good base for both holidaymakers and business travellers. Decorated with an earthy vibe, the 3 start rating hotel is an instant invitation to relaxation. Staff at the Garden Court Umhlanga Hotel are ever willing to help guests with any information regarding Durban and all travel logistics within the city.

There are a total of 204 rooms at the Garden Court Umhlanga Hotel with 3 room categories to choose from. 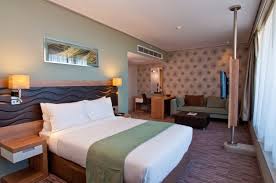 Open lounge in the lobby area

Free parking which is on site, undercover and very secure

Reception is available 24 hours a day

There are 8 venue choices for conferencing at the Garden Court Umhlanga Hotel which can cater from 24 to 180 guests. Venues include the Umfolozi, Hluhluwe, Mdoli and Mlazi rooms. Rooms range from 40msquare to 168 msquare and can be set up cinema, boardroom or schoolroom style. Standard conferencing equipment provided by the Garden Court Umhlanga Hotel include writing materials, TV/DVD player with screen, and flip charts. Additional conferencing facilities can be arranged upon request.

The best way to get to Durban is flying in. With low cost carriers such as Mango Airlines providing many daily and affordable flights, driving into the city is slowly fading away. There’s no need to spend hours and hours on the road when Durban is only an hour or 2 away from most major cities in the country, by flight. In addition to offering affordable flight tickets Mango Airlines allows for payment from store charge cards or as a retail facility at Shoprite stores. Within Durban, car hire is your best option to get around. You will have the reliability of your own vehicle to get around without having to wait for private taxis or public transport. With car hire Durban you will also keep to a budget as booking and payment can be done is advance. Car hire Durban options include economical, luxury or people carrier vehicles. It all depends on the type of trip you want. Families wanting a budget trip can go for the economical cars which is the cheapest and also lighter on fuel. Business travellers can opt for a luxurious sedan with a chauffeur so that they can get some work done during commute and a group wanting to transport themselves in one vehicle can choose the people carrier. The Garden Court Umhlanga Hotel also provides a free shuttle bus service for its guests to the Suncoast Casino and Entertainment World. There is also an airport transfer service to the King Shaka International Airport. Bookings must be made in advance for this service.

The Garden Court Umhlanga Hotel is privy to the rewards programme run by Tsogo Sun. Membership into the programme is completely free with rewards being earned every time you book into a Tsogo Sun Hotel room. Benefits include 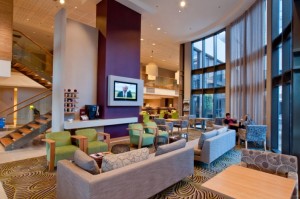 As with all Garden Court Hotels, the Umhlanga Hotel is located pretty near to some of the well-known tourist attractions in Durban such as